The sun set late! 8pm was dusk!  We start to get hungry and Manuel knows exactly where we are going to go for dinner. Just before though, we stop into the Basilica de Santa Maria del la Mar. Here we sit and watch the Good Thursday Mass that is taking place, we leave because we can’t understand a word! The mass is in Catalan! I’ll get to that a little later.  Still we soak in the scene and it is beautiful.

After a dip in the holy water we decide it is time to eat. Barcelona is a waterfront town. In some ways walking around town you would never know it and then it hits you. Just after the Basilica and down a narrow street is the huge city marina.  Behind the marina where the land juts out a bit is a section of town called Barceloneta. It is here that the fisherman lived, where people hang their laundry out to dry and has a Napolitano feel to it. Walking the evening streets, you hear the washing of dishes behind lace curtains, the barking of dogs and the clacking of glasses, forks and knives. Faint noises from televisions and even people yelling from room to room, this neighborhood is very much alive with residents of the last 50 years. We walk through the Placa Poeta Bosca and see a game of soccer by a bunch of 10 year olds… as we zig zag our way around we find our destination.

Tapas is a way of life. Just like NY delis, there is a tapas place on every corner in Barcelona. Funny enough, they don’t take up much space and are usually long narrow bars where you stop in for either 5 minutes or 5 hours depending on what you want. Vaso De Oro as been around for a while and it is BUSY! In general –  Tapas is usually served by men and many of the waiters will even cook some of the dishes behind the bar which makes for a really loud and cozy environment. They are actually called Cerveceria’s which literally means Beer Joint and there are plenty of cold beers on tap.

The typical white jacketed waiters are quick and if you don’t get your order in within about 10 seconds they move onto another set of customers. We are surrounded by locals and tourists that each have an insatiable appetite for tapas. When we arrive the bar is full, we squeeze into a nook on the side, order 2 Riojas and some starters and wait for a seat at the bar. Within minutes we get 2 spots and just in time for the first tapas to arrive. It is a split between Manuel and me – I wanted the Peppers and He the Solo Meo which is some cut of beef he swears is like nothing you ever tasted. Then the Fois Grois showed up fried with Onions, then the Almonds, fresh bread and Manchego Cheese and the Green olives that have a fresh nuttiness about them. I am realizing that there is not that much to eat if you don’t eat fish, meat, pork or poultry. Still the servings are perfect and the wines keeps flowing! 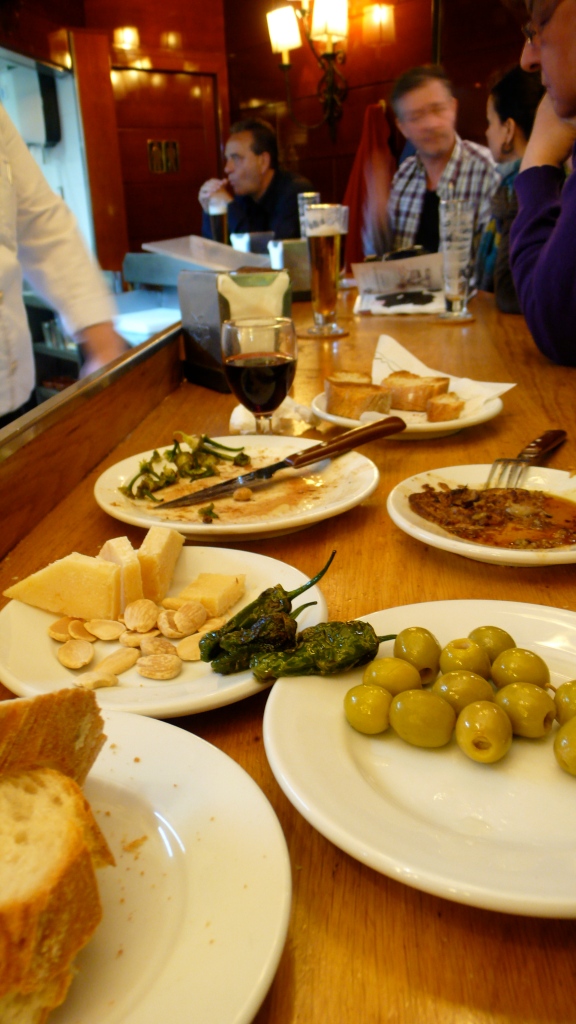 After our dinner we move onto an old neighborhood restaurant that has been passed from generation to generation. Founded in 1921 Paco Alcalde has served the locals population traditional fish recipes for years. It reminded me of a sort of old fish joint in Cape Cod. Pictures on the walls, fishing nets as decor  and bright lights. It is about 10pm and we walk into to say hello. Manuel came here all the time when living in Barcelona and wanted to see if the same group was still there… Sure enough they were and we were welcomed with open arms. We shared wine and had a custard dessert while we caught up on the local gossips. Jamal who is Morrocan just got married, the owner complains that his son is not taking over the way he wanted to, the Bartender behind the bar from Urguary is counting his days to retirement and the cousin at the door will keep that post till the day he dies. The Paella and fish dishes keep coming out of the kitchen and the cooks are the mothers and grandmothers that are easily over 70 years old. I urge you to take a walk through Barceloneta and have a meal here! We promise on our next trip – we will have a paella with them! After many hand shakes and hugs we realize we spent over an hour there! We say our goodbyes and are off to the marina for a night cap. 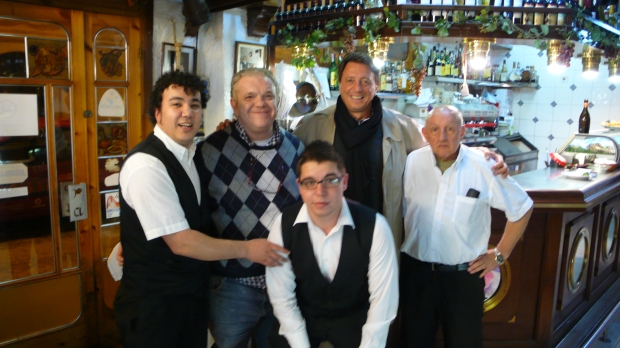 The Reunion! Friends at the Paco Alcalde in Barceloneta!

Our final stop is Cafe Foc. Yes FOC. and it is pronounced “Fuk”. The mix here is an unusual one. Many locals and lots of Boaters. The weather is cool and it is not the season for  sailing or boating, still the marina attracts all sorts and many of them are here tonight. The irish coffees are divine and we meet a few people behind the bar and at the bar. An 11 year old blonde girl sits at the bar and hassles the waiter as she watches him make mojito after mojito. I realize that kids are not even allowed to sit at bars in the US and this is what makes Europe so different I also wonder if it is so good for a kid to learn how to make mixed drinks so early. Isabelle immediatley starts  talking to me too while she pulls out a piece of paper from her pocket that literally says “If I am lost please call this number.” The paper is written in English and Spanish and I learn the girl lives in the Canary Islands with her mom – who is sitting outside. I tell her to try smell the mint that they are making the mojitos with and she is shocked at the smell. “Can I show my mother?” as she runs out and shoves a big sprig of mint in her mothers face.  She switches from English to Spanish on a dime as she tells me of kids pulling her hair in school because she is platinum blond. At this point I think she deserves the chocolate egg I bought at Mauri, so I give it to her and she devours it. The I realize she just took candy from a stranger! I tell her to go find her monther and I decide to finally listen in on Manuel’s conversation which is actually with an adult. Meet Angel Pascal who has an enormous beer and plate of ham in front of him. I wonder how he is even going to eat all of it! He is a food critic and gives us a list of places to check out for food. We only have 3 meals left in Barcelona if you include breakfast and I write a few down. He gives us the low down on real estate and the gossips of the city which he says, even though there is a recession the market has risen! Barcelona is HOT!

Pascal and Manuel at Cafe Foc.

The night comes to a close as we are exhausted. We must have walked 15 miles today and more to do tomorrow. Good night Sweet Barcelona! Can’t wait to see what you have to offer tomorrow!