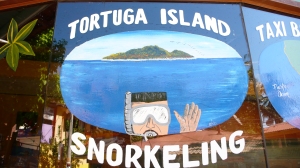 Zuma Tours has daily snorkeling trips to the Tortuga Islands. The islands are about 1 hour away from the town of Montezuma and you board the small motor boat from the beach just at town. The excursion takes all day and even included a few beers, a delicious fish  lunch and 2 snorkeling trips around the area. There were a few boats launching actually, some for snorkeling, others for scuba and a transport vessel which was slightly larger than our boat taking tourist to the mainland. The roller suitcases lined the beach as large plastic garbage bags were divied out to put the luggage into. I thought since you are boarding the boat by beach, what a good idea that was – in case the luggage slipped out of your hand and fell into the sea. I realize however, it was not for that. Our little bot chugged through the 6 foot seas away from land and along the coastline and within the first 4 minutes, everyone and everything got wet. That is what the garbage bags were for.

Cruising Along the Coast

The boat was rocking back and forth and water was splashing in. We all begin to worry about our cameras, our clothing and our wallets when I think to myself, this was dumb, I should have asked for a garbage bag to throw everything in. Luckily the water and wind was warm and the ocean began to smooth out. What is nice about Montezuma from the sea is that you barely see it. The town and the small inns are integrated with the nature. As you head north, Playa Grande is alittle different, here you will see enormous homes and hotels that sit on the cliffs and over look the sea. I would have had a picture to show but it was way to wet! Moving even further north to Playa Tambor, it gets natural again and as you round the corner, Islas Tortugas are in sight and they are beautiful. It was not obvious to me why they named these islands after the turtles, I figured is was since turtles lived there, but actually these small islands actually LOOK like TURTLES!

We enter the coves and see other boats, a white sandy beach (usually not that good for shells) some small structures, people swimming – all in all –  a mini tourist trap! We drop the chef off at the beach and then head to one of the smaller rocks, as we take a ride around, there had to be 5 other snorkel boats there. Tourists flapping around in the water, was not the prettiest sight. I thought to myself how lame we are, fish voyeurs, flapping around with masks, if I was a fish I would laugh at us.  The boat captain takes us around the boat to see if there is a better place and to go when we notice the water looks thick and red. “There is that Red water again, what is that?” I ask.

RED TIDE: In short is an over production of algae due to warmer water temperature. It can harm humans as well as fish. Fish that are contaminated can then affect the birds that eat them.  Red Tide is a natural occurrence but can be affected by humans too. Use of Fertizlizers leaching into the ocean from nearby farms can contribut to the intensity of the Red Tide that wreaks havoc on fish populations. Shell fish get it the worst. They can’t swim out of the red tide fast enough. I was told that whales and turtles can tolerate it, but that is about it. It explained all the dead fish on the beach and explains the red water we saw from the beach on our first day here. To read more about it, see the link here.

There is nothing more depressing to me than animals that suffer. Sure a fair amount is due to survival of the fittest but when man has a hand? I really makes me mad. The captain comes around the corner finding blue water, I pass out the fins, and we all jump in. But before we do I asked the group to do a head count so we don’t leave anyone behind. ALWAYS good to do when in a foreign country and going diving or snorkeling. Didn’t you see that crazy movie OPEN WATER? There were plenty of fishies to see, but I begin to wonder about them surviving the tide that is coming in. The Reef that the fish were swimming on was pretty dead and the water was really warm. Manuel was not overly impressed so I suggest he swim back to the base camp which he does with Niko. Punto and I stay behind and play around with the fish that were all beautiful. Blues and Yellows and Greens, Big and Small. I flip and dive around the fish and it feels good. We work up and appetite as we all get on the boat and do a head count minus 2. Waiting for us back at the main beach was a beautiful fish stew that was just cooked up for us with roasted potatoes. I did not want to eat the fish since I just swam with them but the cook encouraged me to get over it. I did and it was delicious.

Walking the beach – you felt a pinch. Bright Red and Orange Coral was washing up on the beach as I watch 2 tourists collecting some pieces that were pretty sharp! OUCH! At this point the red tide approaches… and the blue water turns to red. 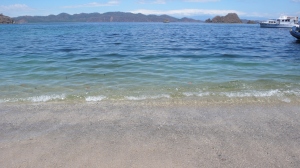 See the Red Tide behind the Blue Water, Encroaching.

After a Siesta while the others went on another snorkel tour that included swimming with the rays, we board the boat, secure the bags and brave what felt like an eternity to get to Montezuma. The Waves were big, the sun was setting and the water was splashing. we come to the area where we saw the whale and realize if he wanted to come and flop around, our boat would be thrown. The Water stayed red as we approach Montezuma Beach and we are greeted with a bech littered with dead fish. Red tide had taken over the entire south tip of the Nicoya Pennisula and just in time for the height of the tourist season.

This is actually the same afternoon that I released the turtles. Luckily Turtles are fine with the red tide and they are not affected. At least that is what they said to me. somehow I find it hard to believe. People are constantly telling me that the world existed without humans and that we are really just a blip on mother earths radar. REd Tide would occur if humans did not have a hand in the warming of the globe, but it is our effect in the acceleration and the acute affect we are having directly and quickly that frustrates me most. Every single decision we make on a moment to moment basis will effect mother nature. I urge you to remember that and try to do something that supports mother E.

For more information on Red Tide see a few links below.

After a long day at sea we are ready for a hot shower and a good meal. Tonight I will not be eating fish. They have enough to worry about as it is.