I had to take a walk – the evening was perfect  and I needed more shells for the necklaces I was making. I had about an hour and sunset was approaching so I ran up Playa Montezuma toward the cove where the good shells are. 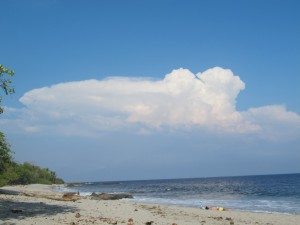 I notice dead fish lining the beach- a direct result of the red tide that has been wreaking havoc on the fish. Most of the shellfish can’t get away from it and many of the fish can get disoriented in it and die. I notice that most of the fish on the beach have their eyes buldged out. 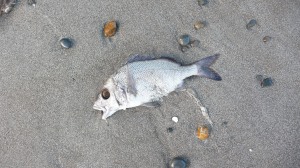 Result of Red Tide. Some Fish don't survive it.

I then see an enormous krane descent onto a dead fish and wonder if the krane is going to get sick after he eats the contaminated fish. I realize again and always how sensitive and balanced we are all and how we are all connected. Water to fish to birds, just like that. But on my way back, good things are happening as I see a crowd gathering just south of town on the beach. There seems to be excitement and THERE IS!!!

Sea Turtles are underdogs when it comes to their hatchlings surviving in the wild. Just a simple walk towards the ocean is a dangerous and they don’t move fast enough to dodge the birds that come down to snatch them away. Once they reach the water there are 100 other predators waiting for them as well. They have a natural instinct to “play dead” in the water in hopes that birds and big fish mistake it for a leaf of some sort, but even that rarely helps. I was told today that 1 and 10,000 hatchlings will survive. There are various programs that assist in the “march of the hatchlings” This one in Montezuma protects the nests and then assists them after they hatch.

I am so excited to be there so I grab a stick an immediately start smoothing out the beach with two other workers. We are trying to make their walk a little easier. There are all sorts of people and tons of camera. This a big night in Montezuma!

As the dusk approaches, the turtles are brought out and people can put on gloves and release a turtle for a small donation. The vivero is NON PROFIT. Clive, from London – tells me that with assisted launches – the turtles survive 1 in 1000! Much better odds. He is in from Cuba where he was teaching a music seminar – took a few days to visit Costa Rica and says to me “the one time I don’t have my camera – and they are releasing these little ones.” I promise clive that I will send im photos and film!

And so it begins, one by one the turtles are released… they need to walk the beach to set their GPS – since they will be returning in 20 years to lay their eggs again. I ask if the red tide is going to kill them, and they tell me somehow the turtles survive the red tide. Great News!!!

There was nothing sweetie or cuter than the turtle launch, indeed it was a spectacular sight.